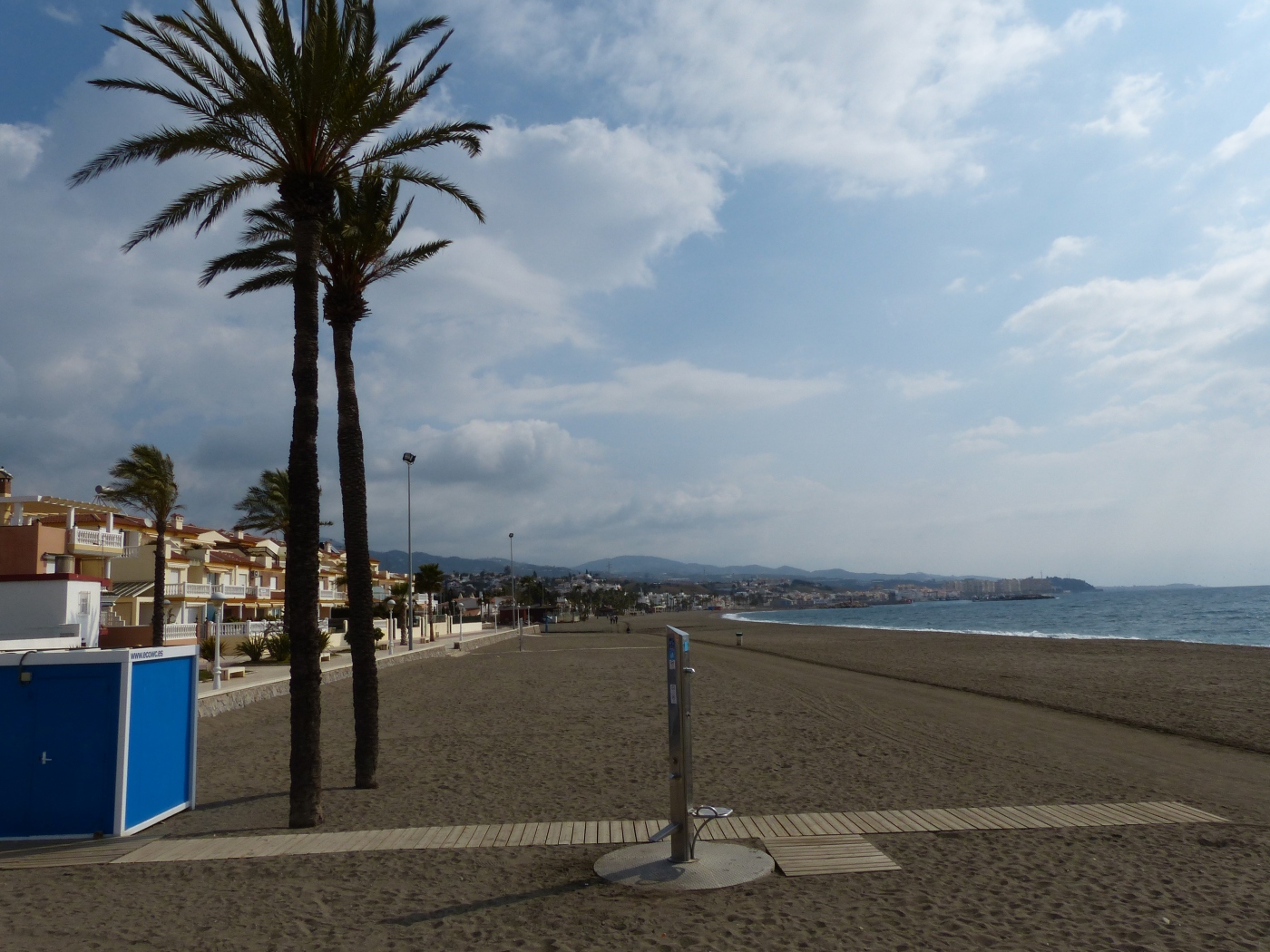 Today we had our first ever completely flat start to the day! For the first 25km we had a beautiful flat ride along the coast in amongst the sea of lycra! It was a kaleidoscope of colour with cyclists of every age, shape and size absolutely everywhere up and down the road, with the occasional runner in amongst them. We also had a bike path some of the way so we cruised along out of the traffic and even though we had a head wind which made things a little heavy going in places, it was a really nice ride.

The bike path crossed driveways and had a slope down and up for each driveway, but then we came to one that didn’t…BANG! went Steve’s bike down the gutter that appeared suddenly in the bike path as we got to a driveway. I was close behind his back wheel, so BANG! went my bike and those poor tyres took a hammering clunking down that gutter with their heavy load. That’s where the hiccups in the ride began.

We stopped for elevenses by the beach in a small town and were joined by an elderly couple who were walking laps of the short path that led down to the beach. We were sitting at the end of the path and they walked up…turned around and walked back…turned and walked back down the path again…turned and walked back…and this continued the whole time we sat there. I guess it was a nice safe place to walk, they got a view for 50% of the walk, a they walked toward the beach, they were away from the busy road and they happily walked up and down, passing each other and stopping for a chat every now and again. As we were about to leave I zipped my jacket up to the neck because the wind was blowing and it was chilly and the lady looked at me and smiled and gestured shivering with her arms wrapped around her. I laughed and said “Si.”  It sure was chilly, so that was our short and friendly semi non-verbal chat. Then as we rode back along the path to get back onto the road, the man gave us the loveliest smile and waved to us as we left. It was a very pleasant elevenses stop.

From there on my bike was making strange noises and the ride felt really really hard. A lot harder than it should have. I was in low gears and struggling even on the flat and gentle slopes and the wind wasn’t blowing too hard. I was carrying one of the heavy metal D locks on the back of the bike and I thought maybe the crash down the gutter may have thumped that onto the back mudguard and pushed it onto the tyre. We pulled over and Steve had a look at it and tweaked things here and there and took the heavy lock off and carried it himself and the bike seemed a bit better… but not for long. I could hear something grating and grinding and riding it felt like riding with the brakes on. Something wasn’t right and something was making the going extra tough. Then came the hills! 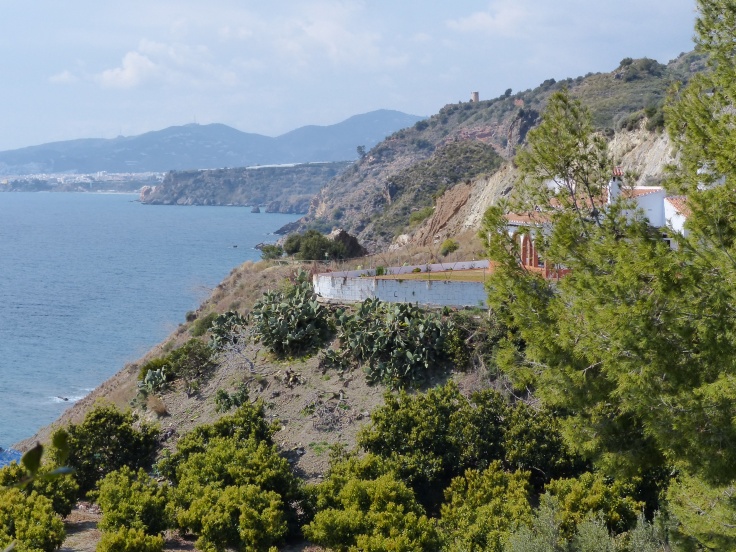 We had some long and pretty steep hills today and with a bike that wasn’t performing properly with some sort of resistance going on, it was tough going in places. We also rode through some tunnels through the mountains and that was a little bit unnerving. The roar of the traffic as it approached was so loud and just echoed the length of the tunnel. I was wearing a jacket with reflectors but I still wasn’t too sure how visible I was to traffic in that dark tunnel, so I flicked on my lights, put foot to pedal and absolutely gunned it! I went as hard and as fast as I possibly could to get through the tunnel as quickly as I could ROOOOAAAARRR came the traffic…hufff…puff…pedal…pedal…went I as fast as I could. Eventually, there came the light at the end of the tunnel (literally) and I was through. We had a couple of those.

The bike was getting worse, it was scraping and grating and grinding and wasn’t happy. At the top of one hill, we stopped at a lookout, had a quick bite of lunch and then unloaded my bike for Steve to tip it upside down and do a bit of maintenance. Sure enough, the back mudguard had been pushed down by the heavy lock on the tyre after that clunk on the gutter and the front wheel had been pushed out of alignment. So Steve fixed those things and the bike seemed happier and even though the gears were now clunking and not changing properly, it was an improvement. As we were sitting having lunch, a couple of cyclists pedalled in and joined us and got chatting. They were from the UK and had a villa in the area they had just put on the market. We chatted to them about what we were doing. Then a French couple also pulled up and saw the bikes and asked me about them and what we were doing. So the bikes attracted a little bit of attention today too.

On we went and climbed more hills. At one point Steve was in the lead and we were part way up a hill and he stopped for a drink. “Oh no,” I said, “we’re part way up, I won’t get going again!”

We both had a drink, the last of what we were carrying and Steve said, “Off you go.”

“I don’t think I can get going again!” I said. I have this thing, you see, that if I’m on a hill, I just have to keep going and use the momentum as best I can. If I stop part way up, I have to do a hill start and I don’t like that.

Anyway, off I went and we both managed to ride up that long winding hill. Then we had the downhill. Steve went flying like the frustrated Tour de France peloton leader that he is. I did my scaredy cat, conservative braking, but was still going lickety-split by my standards. Then I hit the bridge that crossed a huge canyon and WOOOSH, the wind that blew across that bridge threw me into the road. It really grabbed hold of me. I don’t know whether it was the updraft from the chasm below or just the wind from the height of the bridge, but whatever it was it buffeted that little bike and gave me a fright as it pushed and threw me around. I caught up to Steve who had stopped.

“Yes,” he said, “that’s why I stopped because it gave me a push so I knew it would be worse for you.” He said when he saw some cars coming, before he caught sight of me, he at least knew I hadn’t been pushed under the wheels of a car!

After some more hills we arrived in the town of Almunecar, where we had chosen our next campsite. It happened to be up another hill, so we pedalled up and stopped at reception. Door closed, sign saying “we’ll be back soon or we’re in the bar at the end of the terrace.” Hmmm, not sure about this place. It looked a bit dodgy. Steve went for a walk around and said he couldn’t see a toilet block and it did look a bit unkempt. Here we go again…another accommodation let down and another last minute search for somewhere to stay (it was now getting on for 5.00pm). Steve consulted the map and found a hostel back down in the town and it had good reviews. Off we went, then stopped and booked it online so we were absolutely sure we’d have a bed. Then began the tricky exercise of navigating the narrow little back streets to find its location. After pushing the bikes up some cobbled paths, Steve asked a local for directions to the street. In rapid Spanish and many hand gestures showing left and right, then a brief consultation with a voice through the intercom of a nearby apartment above a shop, he revised his previous directions, gave us some new hand gestures and we were back on our way, through the little cobbled laneways. We eventually found the hostel and it’s a nice place, we have our own room with our own bathroom and the owners are very friendly. So we eventually found a bed for the night.

So we rode 55km and I had also wanted to do a run today, so despite the tired legs and feeling in need of a warm shower, as soon as we had unloaded the bikes, I headed out for a run. There’s a nice wide path that runs beside the water, so off I went weaving in and out of the pedestrian traffic to do a quick 6km to end the day. It was a nice run beside the beach and the tired legs held up OK.

When I finished, our stomaches were reminding us that it was getting late and being fed would be a champion idea. The hostel doesn’t have a kitchen though and no means for us to cook, so resourceful as ever, we walked down the street and across the road to the beach and fired up the trusty little Trangia and cooked ourselves some nosh. We sat on the sand, watched the sun go down over the Mediterranean and ate our “reserve rations” of cup-a-soup and a packet pasta meal.  Not exactly gourmet fare but beggars can’t be choosers.

So today had its ups and downs…some up and down hills…some bike issues…some accommodation challenges…but we finished up OK. Tomorrow is another day. I don’t know if we are now in hill territory, so we’ll have some more climbing to do tomorrow or not. I’m still a firm believer in “a healthy state of denial”, so I think I’ll just stay in that happy place until I’m actually faced with the mountain in front of me, then I’ll just get my run up, go for my life, keep as much momentum as I can and pedal for all I’m worth until I eventually, and hopefully make it to the top! A little bit of flat would be nice too though! I’ll cross fingers, toes, earlobes and eyelashes and hope for that!