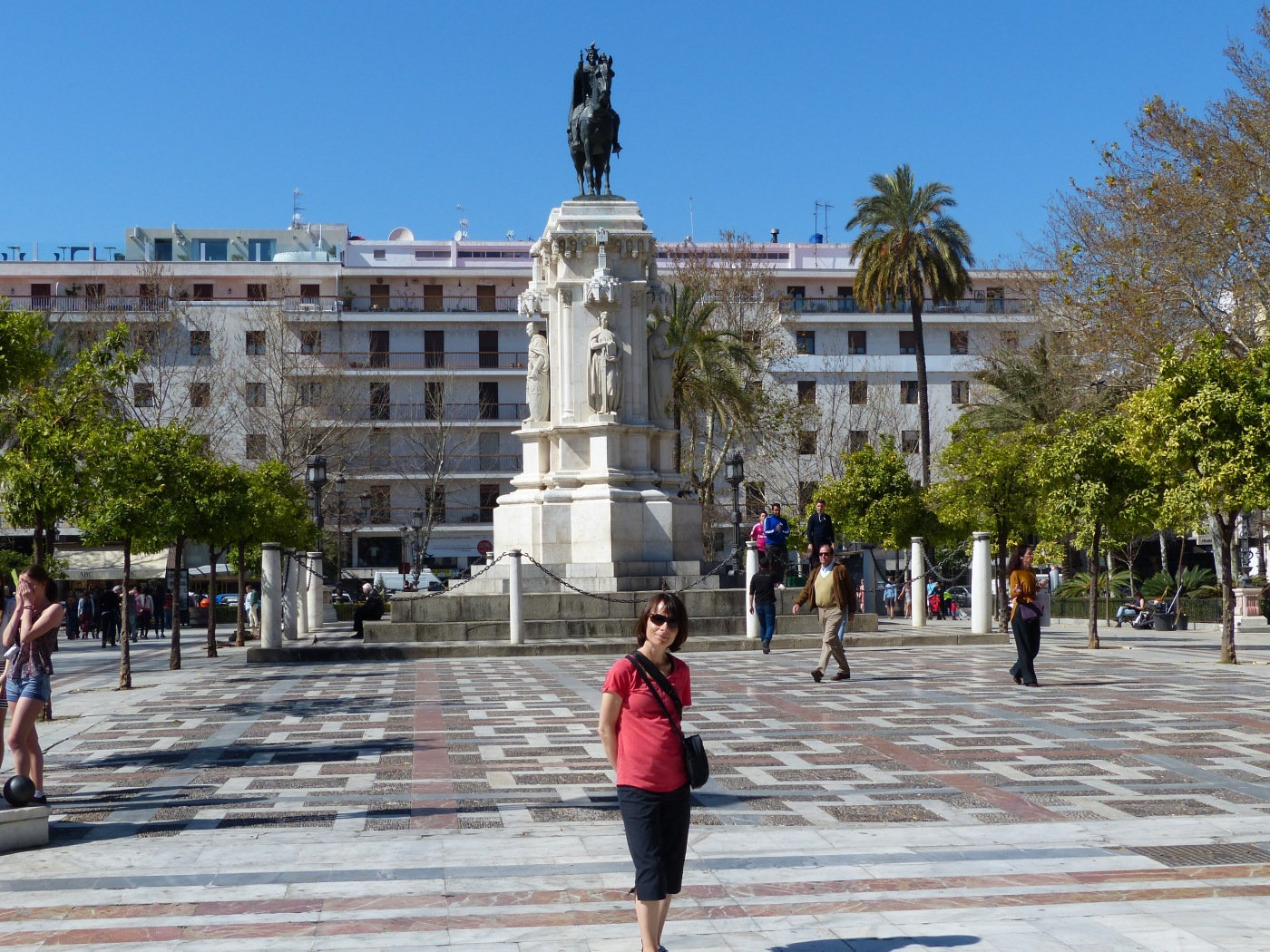 I love Seville. It’s a beautiful city. Simple as that! Today was a roaming day and in the beautiful Seville sunshine, we roamed the streets and cathedrals of this lovely place. The buildings and architecture are beautiful, I love the different plazas with their central fountains or statues and I love that the city has a more slow paced attitude even though it’s busy. There’s lots of people and many more tourists but it doesn’t feel like a hectic city at all.

We had a slower start to the morning, which was nice, since we didn’t have to be up and packing things and loading bikes. We popped across to the supermarket and got a couple of things for breakfast and then sat in a plaza in the sunshine, had brekkie and planned our day of roaming. We began at the Collegiate Church, which is now a museum of antiquities from the church’s history. We walked around looking at the paintings, ornate alters and sculptures while listening to an audio commentary.  There’s been a temple of some sort on the site since the 9th century and to cut a long story short, the Romans were there, then the Arabs came along and overthrew the Romans and built the grand mosque, then the Christians came and put the run to the Arabs and built the church, which then fell down on the day of its inauguration due to poor structure, so it was rebuilt with stone pillars and that’s the building that’s there today. The alters and tabernacles were so ornate, with silver and gold and such incredible detail, I didn’t know whether to be impressed with the work that was put into it and its beauty or a bit disapproving of the money that has been spent on creating something so ornate, that could have fed and helped an awful lot of people over the centuries. I guess there’s a few ways to look at most things. 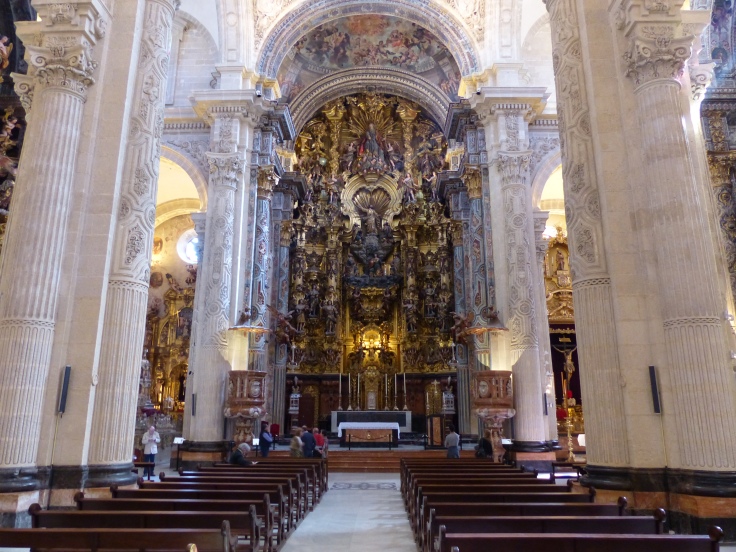 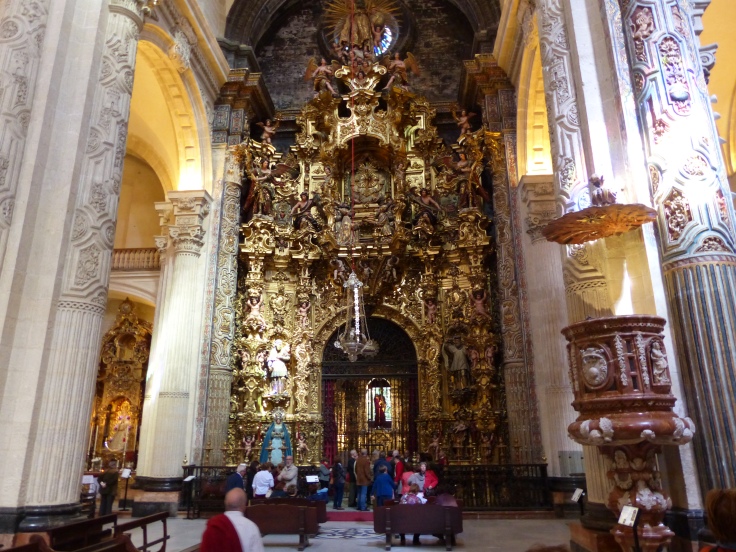 After a morning of wandering the ornate aisles of the church, we sat in the sun for a quick snack – a cup of tea and a tub of pineapple for me and an OJ and sandwich for Steve. The look on Steve’s face when he bit into that sandwich and the “Mmmmm, saaannnndwich,” that he sighed in a moment of culinary ecstasy. Oh, how we appreciate the simple things when those simple things have  been out of our reach for a while. I don’t reckon Steve’s had a plain old bit of bread with some chicken in between it since we left and that plain ol’ sandwich went down a treat! Then off we went to the Grand Cathedral itself.

The Seville Cathedral is the biggest gothic cathedral in the world. It too has a range of cultures, from Christian to Islamic in its history. The orange courtyard and base of the Giralda Tower are what remains of the Mosque it once was. It was a mosque, then when the Christians came it was consecrated as a cathedral, so it certainly has a rich tapestry of a history. It is nothing short of impressive to look at and stand within, in all its 23,500 square metre footprint. It’s immense, ornate and just simply breathtaking. 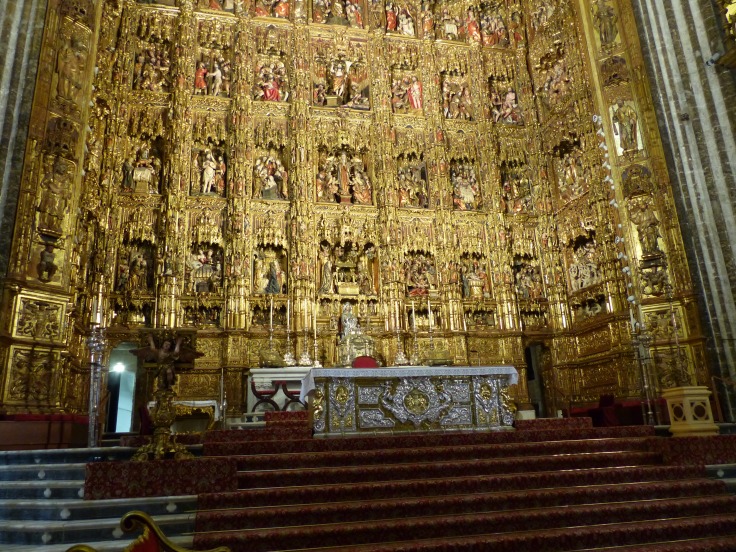 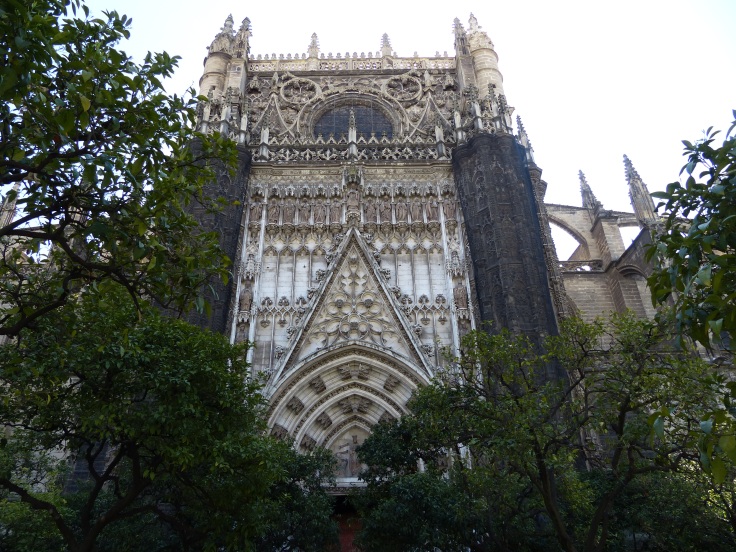 We roamed the various nooks and crannies, climbed the Giralda Tower, up the long, winding, sloping cobbled ramp and looked down upon the city.

We sat in the sun in the orange courtyard and just gazed up at the extraordinary architecture and then walked across the cathedral’s hall to see the tomb of Christopher Columbus.

Yes, the great Chris is lying here in his final resting place. I think it’s interesting that Christopher Columbus is lying here and Ferdinand Magellan sailed from Seville when he went off to circumnavigate the world. Two adventurers with a bit of derring do in their veins both have a connection to Seville. Even though Ferdinand Magellan was Portuguese, I reckon Ferdie and Chris would have crossed paths in their days as intrepid and dare-devilish youths. I reckon they were a couple of daring lads on the town, regaling each other with tales of their escapades and fearless deeds. This is how I think the story went…

Chris Columbus, a suave and cultured chap met the similarly dashing Ferdie Magellan while at college together. As fate would have it they found themselves sitting next to each other in their first college lecture for the class, “Mastering Sailing and Seacraft for Aspiring Adventurers” and struck up a conversation.

“Oh, would you believe it,” exclaimed Ferdie in exasperation,  “I’ve left my spare quill at my digs, and have nothing with which to record the wisdom spilling forth from dear Professor Pugwash.”

“My dear fellow, I too am in a state of vexation, “ replied Chris, “my quill has this minute run out and I have no ink with me with which to recharge its capacity.”

“What say we remove ourselves and find an alternate means to pass the time?” suggested Ferds.

So off they went and sat in the college grounds while supping on a large tankard of mead and began to acquaint themselves.

It was then Chris learnt of Ferdie’s problems with the rudder on his ship, hence signing up for the class. “The rudder just won’t turn, the blasted thing!” moaned Ferds, “no matter what I do the darn contraption insists on going in a straight line. I shan’t be deterred from my dreams of daring deeds though, my good chap. I tell you now, if all I can do is sail the blasted  vessel in a straight line, I shall jolly well be the first fellow to circumnavigate the world, if that’s what it takes. I shall set off from Seville and let the blasted ship have its head and if I can’t turn a blessed corner because of that wretched rudder, so be it! I shall head straight and continue straight until I have sailed right around the bally globe, so be it!” And so it was, that Ferdie unwittingly described his fate, future fame and fortune, all because he had a recalcitrant rudder.

“Good show!” agreed Chris. “I too will take to the seas and sail the ocean blue until I reach far flung lands. I have promised near Aunt Myrtle that I shall jolly well find a corner of this wide world that I shall set foot on and name in her honour. She’s a good ol’ stick is Aunt Myrtle Erica Gonzales-Columbus from Seville and she’d be surely chuffed to have some exotic far-flung territory named in her honour. I did say to her though, I said, ‘My dear Aunt M, I’m afraid I couldn’t possibly name a new land with the mouthful that is your full name, I simply wouldn’t have the space to write it on a map, my old softie. How about I just shorten it somewhat and stick to the beginning of your name only, would that do, my old love?’ so we agreed that initials and one name would suffice, so I shall now sail the seas, set foot on a new and grand land and in honour of my favourite aunt, will declare it to be A.M.ERICA and dear Aunt Myrtle Erica will be suitably chuffed I’m sure.” So it was, that a promise to his jolly old Aunt became the deed with which Chris would be forever remembered.

So the story goes.

So that’s what I think happened and Seville became the city that thereafter connected the two lads and their deeds would see them enter the history books. So we paid our respects to Chris Columbus at his tomb in the great cathedral and then began to exit once more into the sun. It was at this point that we again got into a teeny bit of trouble…Steve was ticked off my a cathedral priest for wearing his cap inside! Honestly, us uncouth Australians, you can’t take us anywhere!

Our final roaming destination was the Real Alcazar, the Royal Palace. This was on Steve’s list of must-see places because apparently Game of Thrones is being filmed there sometime. Not being a watcher of GoT myself, I wasn’t fussed about that particular reason for a visit, but it was a wonderful place to see. It’s the official residence of the King and Queen of Spain, has the most beautiful and extensive gardens that were so nice to wander around in the sunshine. There was also a display of 16th century tiles which were really interesting and I still can’t wrap my small brain around the idea of seeing and walking on things that old. 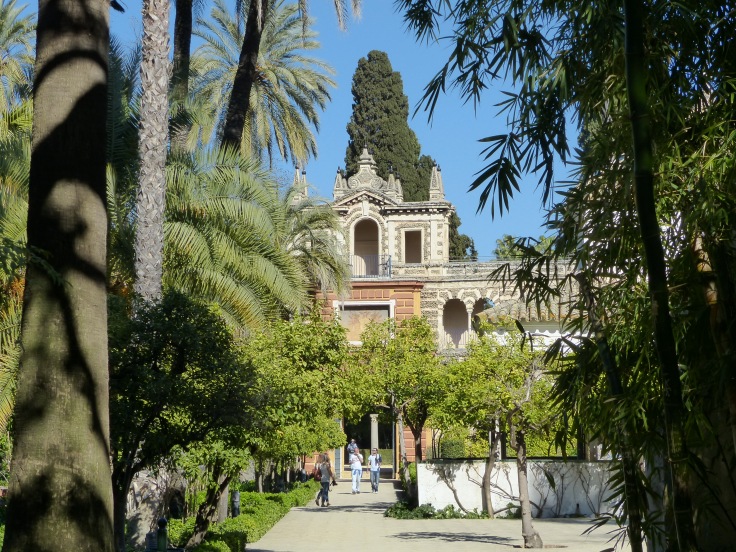 We finished the day with a bite to eat at a Tapas Cafe, where Steve enjoyed a chicken burger and chips and I tried the traditional Espinacas con Garbanzos (Spinach and Chickpeas).

So it’s been a lovely restful day, which we really only spent in three places, but we saw a lot and learnt a bit and roamed leisurely through a beautiful city. I even spoke a bit of Spanish on occasion.  Tomorrow we continue roaming, but to some places a little further out of the city, so we’re going to saddle up the bikes for some gentle site-seeing by pedal. If the sun keeps shining like this I might even have to unfold a pair of shorts! Look out Seville, the “Tassie Tan” is in town! Prepare to be dazzled and blinded by the white!