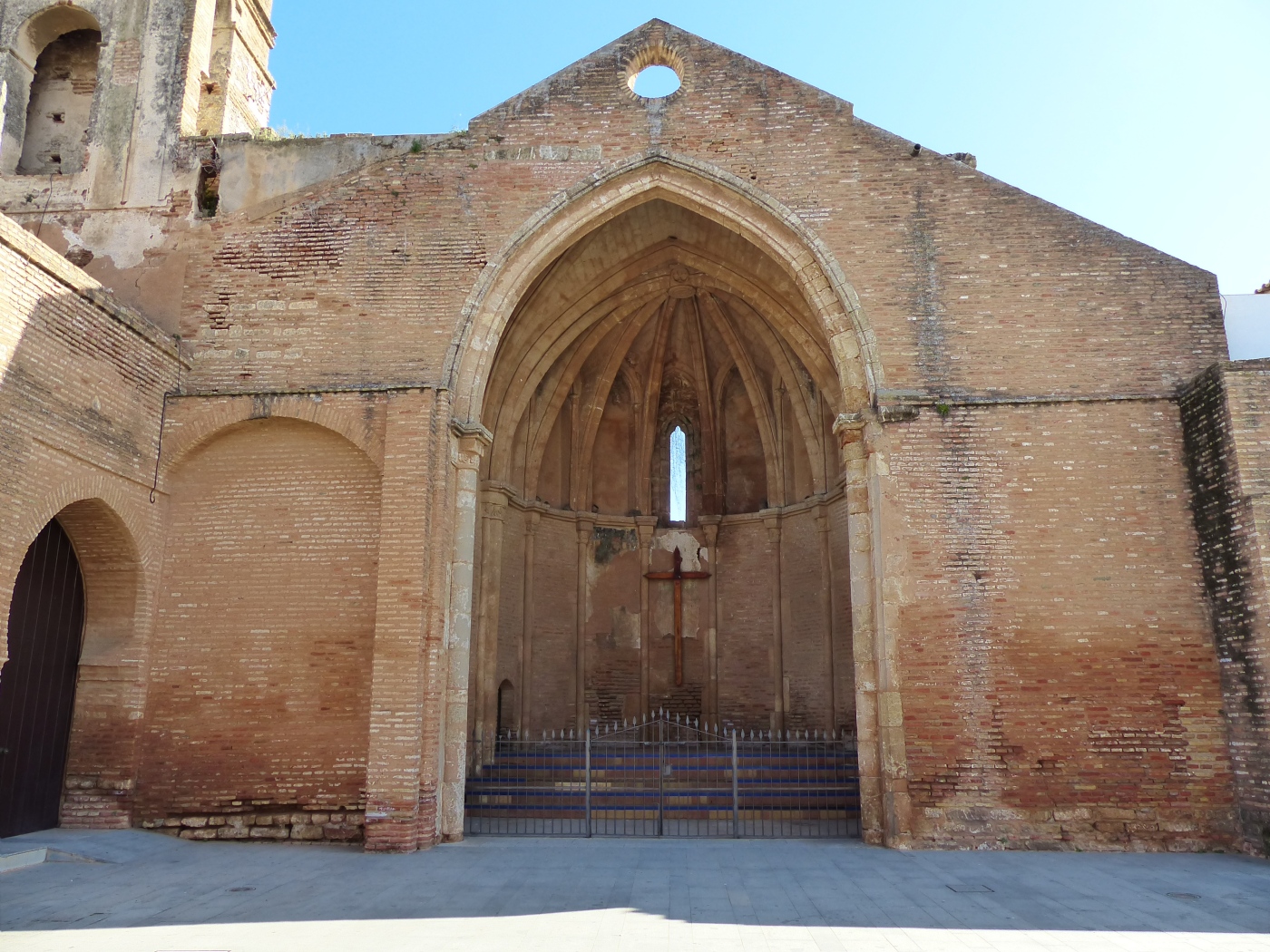 We packed up from our overnight hotel stay in Huelva, to begin our pedalling towards Seville. We’d done all the route navigation the night before and had a great direct path to take us to our next campsite, about half way to Seville. As we left the hotel I had a definite feeling of “We’re not in Portugal anymore Toto!” The city was noisy and busy and rushing and had a very different feel from the cities in Portugal which were all so quiet and laid back and unhurried. Off we went through the busy city streets and came to a roundabout that would take us onto our planned road. At the ramp leading to it, was another of those signs. The round ones we’d encountered before, with a picture of a pedestrian, a bicycle, a motorbike and a tractor (no cow this time). Steve stopped. “Do you think that means we aren’t allowed on that road?” he asked.

“None of the pictures have lines through them,” I replied, “you’d think if it was saying no bikes, there’d be a line through the picture like last time, not just the picture.”

We looked at the sign for a while, not sure what to do. Maybe it was just alerting motorists to the fact that there would be these things on the road too.

“Do we risk it and plead ignorance if we’re wrong?” asked Steve.

So we pedalled onto the road and it had a really wide shoulder, so we again thought, that must be a wide shoulder so tractors and things could use it without interrupting traffic and that must be what the sign meant. Pedestrians, tractors, cyclists and motorbikes are OK and here’s this extra wide shoulder for you to use. It was a pretty hairy ride though and it was soon clear that this was a major arterial road, like a major highway.

I shouted back to Steve, “Did you know it was a motorway when you looked at the map?”

“No,” came the shouted reply, partially lost in the noise of the trucks and floating off in the haze of carbon monoxide that was surrounding us.

“No,” came the shouted reply through the cacophony of motors and exhausts.

Then a motorbike whizzed by. Right, I thought, they were one of the pictures on the signs and there goes one of them, it must be OK to be here. It didn’t feel right though. It didn’t feel like a road we should be on. We were getting some honks from passing cars too. Even though the shoulder was nice and wide, the downside was I was dodging huge metal bolts, pieces of plastic and various other bits and pieces that either fly off fast-moving trucks and other vehicles or are thrown from them. I thought, if something like that flies off a truck as it’s going past me, I’m a gonner.

We decided to get off the road and try to find a better one and a slip lane up ahead looked like the perfect escape route. As I headed up the lane, I noticed some lights over my left shoulder and Steve calling, “He’s telling us to take the slip lane.”

I’m already doing that, I thought, but then the car attached to the lights went past and I saw it was a policeman. He stopped at the top of the lane and we stopped while he got out of the car. He spoke to us in rapid Spanish, which we couldn’t completely understand but could get from his gestures and the odd word that we shouldn’t be cycling on that major road.

“Yes,” we said, to agree that’s where we were heading.

He began to name towns and gesture with his hands to say go this way-then this way-go through this town-then this town.

We thought we’d just head to the town that the slip lane was taking us to, so we could grab something to eat and sit and look at the map and recalculate. As we began riding towards it, who should pull up in front of us? Our friendly policeman! That nice man was shadowing us to make sure we went the right way. He got out of the car and asked to see our map, so Steve showed him the GPS and the policeman tapped it here and there and pointed out the road we needed to take. So we thought, since he’s being so helpful and we don’t want to appear ungrateful for the directions, we’ll just keep going and take the road we need to be on and recalculate at a later time.

Off we went down the suggested road, which brought us to a roundabout, which we needed to go all the way around in order to head to the next town along our new route. Again, that lovely policeman drove past and pulled up in front of us, got out of the car and showed us which way to go around the roundabout and which road to go on. We gave him a wave and a thank you and we were again on our way. Now, he was probably doing that to make absolutely sure those law-breaking foreigners with strange ideas about preferred modes of transport, did not go back on the main road, but we like to think he was just being a very nice and helpful fella. So…a somewhat eventful start to the day…traffic…a run in with the law…but a nice member of the police force he was and helped us on our way! Although, I’m still confused about that sign. Any other sign that’s saying not to do something or not to go somewhere has a line through the picture and this one didn’t. Oh well, lesson learned!

We pedalled on to the town of Niebla and sat down to reassess our route. We were still heading in the right direction, just a slightly more roundabout way of getting there. It was a decent road, pretty flat, not too much traffic and a bit of countryside to see along the way. So all was well. As we rode along, we passed a fellow traveller, but this man was doing it on foot. He seemed to be on a pilgrimage of some sort because he was wearing a full monk’s or friar’s style habit and was carrying a tall, crooked staff. He gave us a pleasant greeting and a wave and we returned the greeting. I’d really like to know who he was and where he was going to or from. 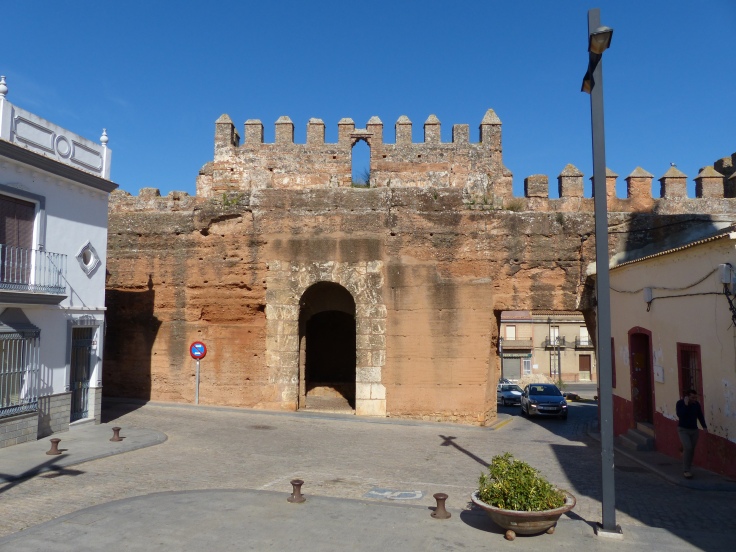 We cycled past farmland and the farms here are very different from Portugal. The farms there were small and seemed to be tended by one or two people, out in the fields with hand-held tools working the land. Here the farms are big and are tended to with machinery. We passed citrus groves, olive farms and, something I hadn’t seen before, an aloe vera farm. At least I’m pretty sure that’s what it was, rows of small plants that looked exactly like aloe vera. 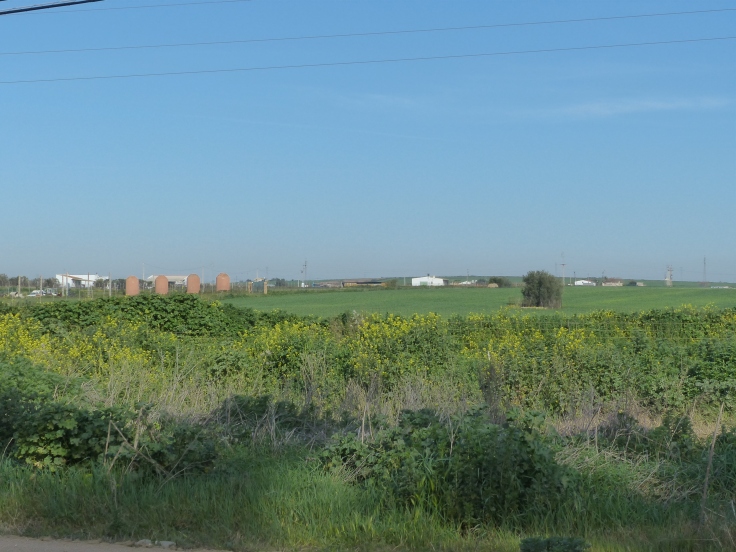 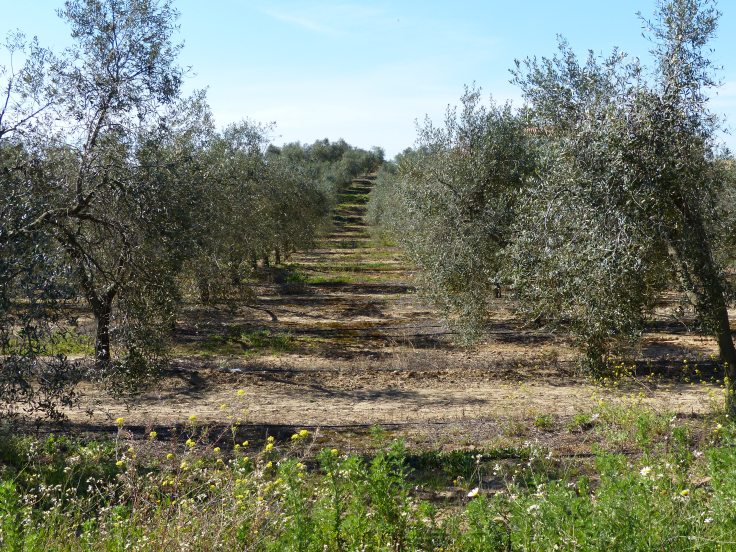 We cycled into the town of Almonte and stopped to have some lunch and watched the town go about its business around us. Busy and noisy, even though it wasn’t a big place. As we were riding out, I think we may have cycled the wrong way up a one-way street! It was a bit hard to tell but I think we were going against traffic. Darn! Another black mark against us for a Spanish traffic violation! On we went though and the day turned on another picture for us. We hit 30C at one point and I sure remembered to drink today! It was hot pedalling, but a gorgeous day and nice to be in the heat. 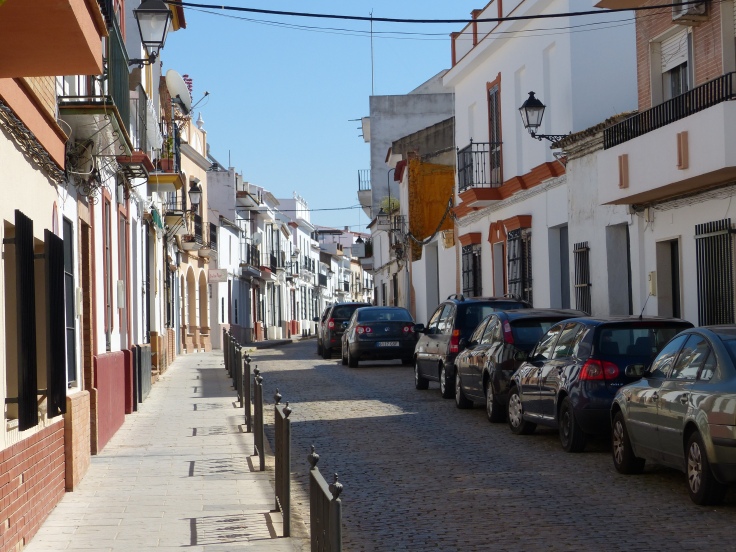 Then we eventually came to the road to take us to our campsite of Donarrayan Park. It’s a beautiful spot in the Donana Natural Area, so it’s a bit like a National Park. We are surrounded by trees and we are the only ones here. It’s peaceful and quiet and the only sounds we hear are the birds in the trees (oh, and the mosquitos buzzing around our ears!) 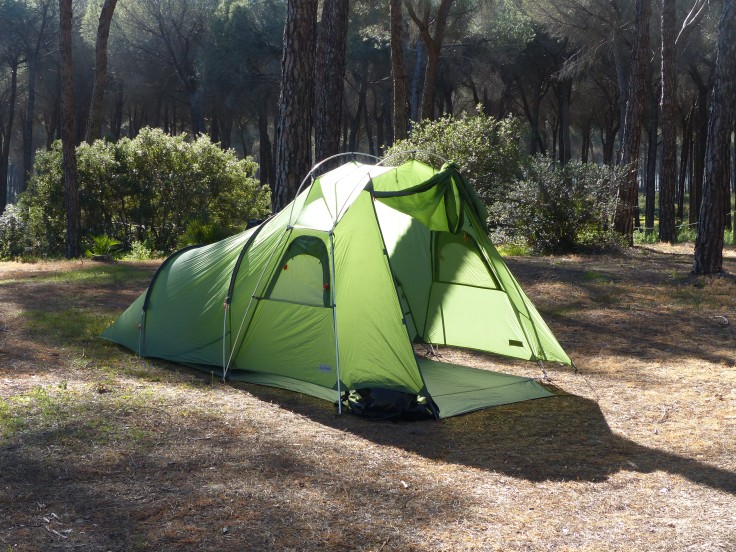 We also set a new record today – we cycled 69km today, so not a bad effort for a single ride.

Hopefully tomorrow will be peaceful and uneventful, with no laws broken or traffic violations incurred! If not I’m hoping someone’s prepared to post bail for us, or at least post Steve a metal file hidden inside an enormous pastry!