D Day – Departure day! Last minute checks of bits and pieces, a morning spent with parents just taking it easy and spending time at home for the last time for a while. Then many goodbyes to little Rosie dog and off to the grand Devonport Airport we went. The moment of truth…check-in…the scales…would we get through? Had we calculated our weight allowance correctly? Would I get to take my precious packet of Madura leaf tea? Would Steve get to keep his fancy shmancy pillow? We toddled up to the counter and bag one went on the scales, then bag two and three, then the bikes. 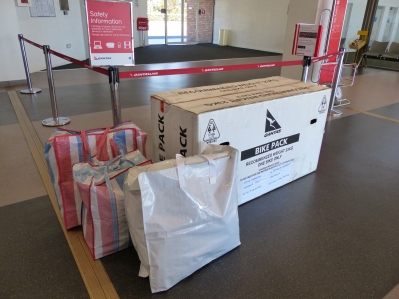 “Ooh”, said Mr Check-In Man a little dubiously, “looks like you’re over weight, let me just tally that again, you’re only allowed 30kg each.” Steve and I then simultaneously chorused that I, being a Silver Frequent Flyer, meant we had a bonus 12kg allowance. “Oh, yes, so you are and so you do,” Check-In Man said with a smile, “you’re all good. That’s good because international excess baggage is not good for you and it’s not good for us, so you’re good to go.” Just like that we were through, with our luxury items of tea, pillow and extra bits and pieces and odds and ends. Thanks Devonport Check-In Man!

After  our short trip to Melbourne, then several fairly uncomfortable hours in a big plane, we touched down in Dubai, had a very short transfer, just enough time to get off the plane, go through security, catch the train to our departure gate, guzzle a quick cup of tea and then board the next plane. I’m glad I packed my go-to travel snacks for the high-maintenance eater like me, because there was a mix up with my food on the trip to Lisbon. I was served my vegan meal, only to open the foil and discover pasta and cheese. I asked the flight attendant if I had the right meal, because I was vegan and had been given cheese.

“I’ll just check,” he said. Then returned and said, “I’m sorry they must have given us the wrong meal when they loaded, but we can fix you something.”

“Oh, no” he said, “it’s no problem.” Then the senior flight attendant lady came over and was so apologetic, “I’m so very sorry, it’s our mistake, I’m afraid we’ve given your meal to someone else by mistake, I’m so very very sorry, we’ve alerted first class and they will fix something for you but it may take a while, very sorry.”

So I sat there for a while, eyes glued to the haloed ground of first class a little way down the aisle, waiting for someone to emerge with my newly prepared vegan delights. Finally my lovely senior flight attendant returned carrying a splendid looking plate of ravioli and…cheese. She showed it to me with an unhappy look on her face and simply said, “I’m sorry, this isn’t right either is it, they’ve included dairy.”

“No,” she said, “I feel terrible because it’s our mistake and I must fix it for you.”

No amount of reassuring or saying all is OK would stop that efficient and professional Emirates lady, so off she went again power walking down the aisle to first class and returned with a fruit plate. “Perfect,” I said, “thank you so much”.

“Can we get you anything else, extra dessert? Tea? Coffee?” she asked

“Thank you,” I said, “this is lovely, I’m fine.” And that was that, but I must say I was still a bit peckish after my gourmet, beautifully presented first-class plate of three slices of fruit, so I dipped into my pre-packed peanut butter and jam sandwich, with my little bit of home, courtesy of our lovely neighbours Tim and Alison who own and run Rocky Gardens jams and relishes. Alison had given me a jar of blackberry jam before I left, so I tucked into the yummy and familiar PBJ sandwich with delight. Hardly first class fare and hardly gourmet, but perfect none the less!

We arrived in Lisbon a little ahead of schedule and headed to customs and what a surprise! It would have to have been the easiest and quickest trip through passport control of anywhere we’ve been. We fronted up to the window, handed over our passports to the nice Portuguese customs man, he stamped them, smiled, said “Obrigada” (thank you) and off we went. That was it! Nothing to fill out, no questions to answer, just a smile and a thank you and off we went. I don’t know if that’s because Portugal is very free and easy with who enters or if our Australian passports make us seem pretty innocuous but whatever the reason, we were through without a hitch or delay.

We picked up the luggage, with a discreet fist-pump to each other because every bag and both bikes had arrived along with us, found a little nook in the luggage hall and prepared to put the bikes back together that we’d had to dismantle to put in the boxes for the plane. Steve surrounded himself with his tools, like a surgeon about to begin open-heart surgery, we set the timer and he was off, putting a wheel here, a horn there, wrapping the chain around this and that and in exactly 30 minutes, my bike had gone from a little pile of Lego pieces to a fully formed mode of transport. 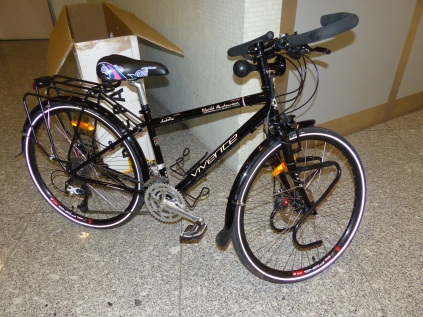 Now…to tackle Steve’s bike which is, of course, twice the size of mine. Steve reached for his knife to cut the cable ties that were holding all the separate parts to the frame and then…”Ooowww”, he shouted, accompanied by some jumping and hopping, “quick, band-aid, grab a band-aid, actually a very big band-aid, actually just a cloth,” came Steve’s rapid-fire requests and instructions. As I was looking through bags to find our medical supplies, Steve stood there bleeding over the polished floor. Yes, he had wielded his cable-tie cutting knife with a little too much abandon and had sliced the pad of his hand. I said a band-aid wasn’t going to fix that and he should head off to First Aid, a sign for which I’d seen earlier. So the bike surgery was put on hold while Steve toddled off to find his own medical support. After some help from a nice security guard who called someone to the unmanned First Aid desk, Steve returned, nicely steri-stripped and patched up by the attending doctor and set about his bike-task again. 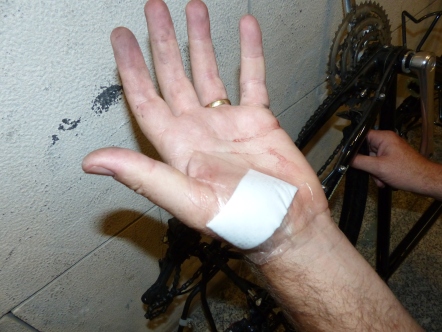 I kept myself busy pumping up tyres and cutting up the big bike boxes into little pieces to make their disposal a bit easier, being mindful of the knife as I went, so as not to add to the casualty rate. Then in 71 minutes, bike number two was complete. So, we had passed passport control, passed through “nothing to declare”, assembled a couple of bikes and headed out of the terminal into a beautiful sunny, clear blue Portuguese day. We were ready to ride!