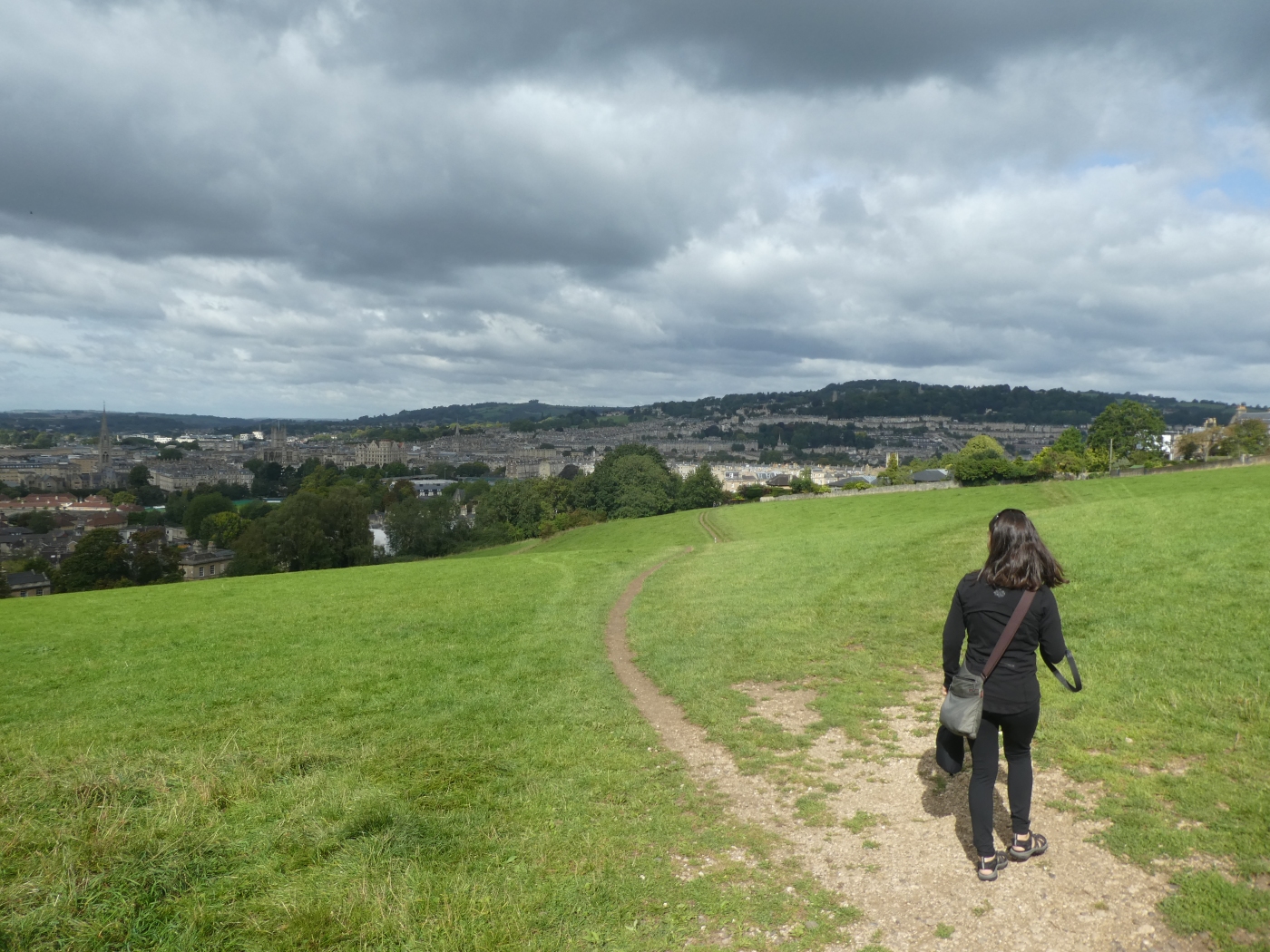 Sometimes it’s nice to just “be”. In fact, not sometimes, anytime it’s possible, it’s nice to just “be”. Not rushing to do things, not feeling a need to go places or see things, no hurrying…just time to “be”. That’s what we did today in Bath. It was nice that we’d been to Bath before and on that visit, we did a lot of the “attractions” in Bath. We did a walking tour with a guide, which was excellent, we went to the Roman Baths, we walked around the Royal Circle, in essence we saw the sights of Bath. If you’re interested, you can read about that here. Today though, we decided to simply become a part of the city, to just walk, blend in, take ourselves out of the city centre and see parts we hadn’t seen before and take the day at a nice leisurely pace. It was lovely.

We started the day with a lovely ramble in the chilly sunshine, up and out of the city. We decided to do part of the Skyline Walk, which took us up some steep steps, along paths and then through a track across a field. On our way up, we walked along the tow path of the Top Canal, part of the Kennet and Avon Canal. We saw a man sitting on the lock gate, seeming to push back against it. We could see a canal boat on its way, gently and quietly breezing through the water. “Do you need a hand?” called Steve. The man immediately accepted the offer and Steve began pushing on the other side of the gate on our side, while the man pushed on his side. The gate didn’t move. They both pushed and pushed, trying to get some momentum up on the gate so it would start to swing. I added my weight and started pushing too. With the push and give and push and give on both sides, the gate eventually opened and folded back into place, to open up the canal for the oncoming barge. The man came across the bridge, to finish the job, with a thank you for the assistance. It must be a tough job being the designated lock opener on the canal boats! A lovely, relaxing form of travel and a great holiday, but I wonder if people draw straws to see who has to get out and walk up front to open the locks each time, or if there’s some bartering that goes on. “You do the locks Brian and I’ll do the washing up for a week.”
“Nah, the washing up and the drying and make all the tea, for two weeks!”
“You drive a hard bargain Brian, but OK. No whinging about the tough locks though, and standing there waiting for us, even if it’s raining!”
“Fair call mate, done deal.”

We walked up high, where we had a stunning view back over the Bath skyline. It was a terrific way to take in the beautiful sepia colour of the city, with the horizon full of that distinctive Bath stone. It was a lovely walk, exchanging “good morning” with dog walkers and others out for the stroll along the hill top.

On the way back down, we continued alongside the canal, watching the boats quietly gliding through the water with the designated lock opener waiting on the bank. The fact that there is a canal half way up a hill still baffles me. That is an engineering success story that I can’t begin to understand! 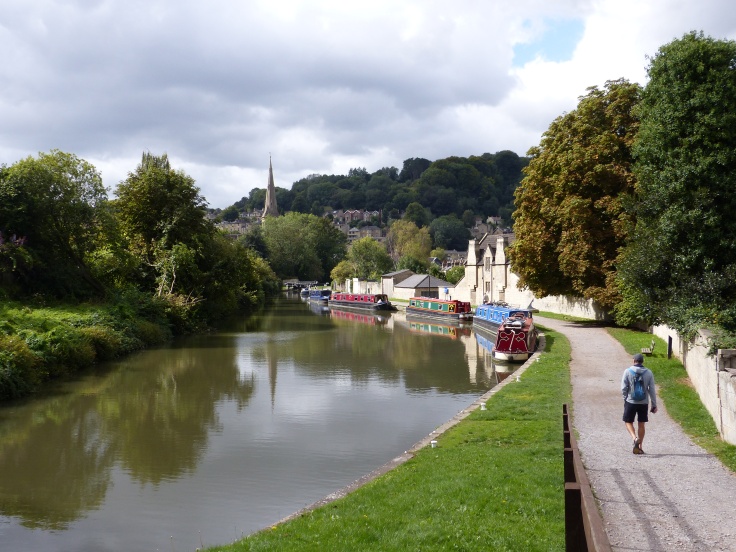 We strolled back through the city, up the little lanes and along the wide streets. We passed through a square and could hear a busker singing with a guitar, with a few self-produced CD’s sitting at his feet. He was really, really good. We stopped for a while to listen and then walked on, before Steve stopped. “I think I might have to buy one of his CD’s,” he said. So we went back, waited for him to finish a Crowded House number and Steve bought a CD. Of course we have nothing to play it on, but we will one day! 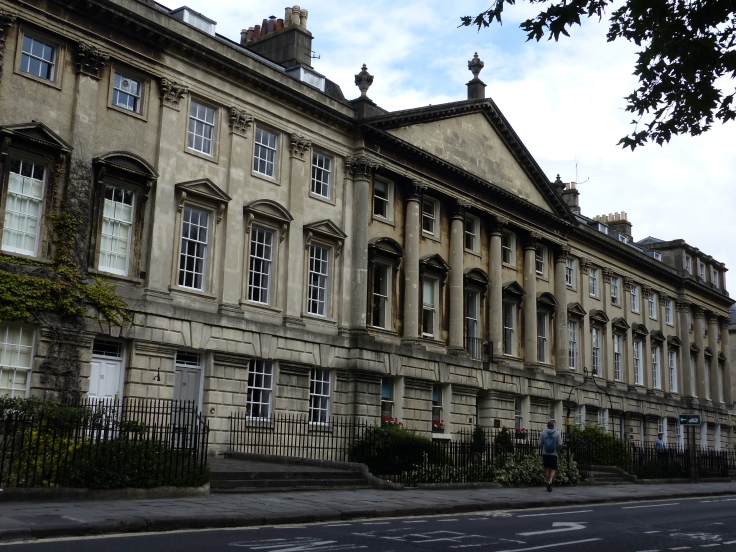 It was over time for elevenses and we planned to do one “attraction” in Bath that we hadn’t done last time and that was to visit the Jane Austen Centre. There was also a Regency Tea Room there, so we decided to combine the two and partake of elevenses in the form of a genteel morning tea. When we sat down, we could hear two other tables of Australians and then another group of three arrived and when they spoke, they were Australian too. At one point, the small tea room was full of nothing but Aussies. I spoke to one of the young women serving and told her it sounded as if they’d been inundated with Australians. “Yes, we get a lot of Australians. Americans, Irish and Australians. We often think, ‘where did they all come from!? and I can’t get over it, that even though I live here and they don’t, that somehow they all know about Jane Austen too.” That made me smile on the inside. Yep, Jane Austen may have been well and truly claimed by Bath, but she’s a global literary figure!

We spent some time looking around the exhibition after listening to a talk about Jane Austen’s life, from one of the guides. It was really interesting and although Jane Austen only spent a few years in Bath, it obviously made a big impression on her, with Northanger Abbey and Persuasion both being set in the city. I also discovered that she wasn’t known as a writer at all in her lifetime. She didn’t publish under her own name because being a woman writer wasn’t the done thing and she refused to publish under a male pseudonym as others had done (like George Eliot). She published simply as “Anonymous” or “A Lady”. Also, no one is completely sure of what she looked like. There’s an unfinished portrait of her, drawn by her sister, but family members at the time said it was a terrible likeness, so it’s not considered a great indication of her appearance and there are no other reliable images of her. The exhibition did have a wax figure of her though which was commissioned by the Centre and was completed after two years of research. TWO YEARS, just researching what she looked like!  All that time was spent analysing letters and any small descriptions of her appearance and after that intensive research, thay believe they have created a fairly accurate representation of her.

Then, we had a further leisurely stroll through the beautiful Bath streets before returning to our cottage for some down time. Then a brief outing to gather nightly supplies and that was our day.

It may seem like an uneventful, almost a “well that wasn’t much” kind of a day, but it was great. It was lovely to take time out from racing time. It was a real treat to not feel compelled to see…visit…experience…go…go…go, but simply to blend in, roam, observe, sit or stroll and just “be” in a place we have both enjoyed spending time. It’s nice when we get a chance to feel like a local, that was the prize and pleasure of the day. Tomorrow we hit the pedals again and move on to pastures new. We are starting to learn from our shorter, slower days though, to take our time, take time to stop and see and experience along the way. We aren’t speedy travellers at the best of times, but each day still has its element of rush about it…pedal on…pedal on…make haste…get somewhere…We may slow down even further though. We have less than a month left and we don’t want to spend that time at the mercy of the clock, so we may do shorter rides, so we have more “be” time along the way. It’s not something we’ve tried (other than on Go Slow Sundays), so it’s an experiment in the making. We may start practising tomorrow and see what the result is. Let’s slow down a bit more, take the time to savour every moment, every place, every experience we can. What we are doing is a bottle full of joy and we want to sip it slowly!