For a country that’s stereotypically known for its windmills, there aren’t too many of them around. This, I commented to Steve yesterday as we pedalled along. In neighbouring Germany and Denmark, you can look every which way and see dozens of wind turbines, but here…nope, nada, zilch, we hadn’t seen a single one. The traditional windmills are also a pretty rare sight, so today proved to be something of a bonanza when those elusive blades on the horizon, finally showed themselves.

We pedalled out of Zwolle under grey but fine skies, after having a quick language lesson with the nice young woman from the hotel. After unlocking the bikes from their secure room off the street, I asked if we could practise some Dutch and she happily obliged, telling us some words and phrases. The trouble is, I can remember words, but putting them together into some sort of meaningful phrase just isn’t happening, the mind keeps going blank. She was very patient and lovely and so we set off into the streets, with our Dutch lesson fresh in our heads, to hopefully stick there for later use.

We had another great ride, following our numbers, along the top of a dyke, then through countryside and quiet villages and along back roads. Although, we did miss a number early on when were riding along happily and then spotted a number on a sign that wasn’t one of ours. Whoops! We must have missed a turn! The thing with using the numbers is you also have to keep your eyes peeled for the signs when they come up, so missing one is a bit like a treasure hunt, to reverse and go back and find the number we missed, then make the right turn and continue on our way. We were far more observant after that and ticked off every number on our list as we tootled along.

As we rode along the dyke, I spotted the shape of a traditional windmill in the distance.

“Windmill!” I called to Steve.

“What?” came the reply, as my words were taken by the breeze and didn’t reach the lead pedaller up front.

Across the fields, there stood a grand and serene windmill, standing all on its own. That’s what you want to see in Holland!

As we rode on, we saw other cyclists and exchanged greetings, I stopped to pat a black Lab pup, on a walk with its owner and we wheeled along on a warm fine morning, with no wind and no rain. Tops!

We took a short detour off the path into the town of Wijhe. As we turned the corner and rode towards the main street, what should we have in front of us?

“It has a windmill!” I called to Steve. This time I didn’t need to say it again, because it stood like a gatekeeper to the town, right at the entrance, looking down and over the cobbled street with people going about their Saturday morning errands. Windmill number two! After not seeing many around, we were on a roll today! Wijhe was another lovely little town, with a single little main street running down the middle of it.

On we went, following our numbers and right on 11 o’clock, our route took us straight into a park with a bench waiting for us. A perfect spot for elevenses.

The sky was beginning to darken in the distance and it looked like we were riding into another possible drenching. Oh well! We picked up the pace and happily rode along again, through countryside and then we saw something that looked very out of place. What are you doing here? You’re a long way from home mate! In a paddock beside a house we saw a group of wallabies and amongst them were six albinos. They are so rare, we don’t even see them at home and here were six of them. I couldn’t quite see the point of having the wallabies in captivity for any reason, but the albino ones, I really couldn’t see why anyone in The Netherlands would want a paddock of them. It wasn’t a zoo, it wasn’t a tourist attraction, there were no signs, just a house and a front paddock with wallabies sleeping and sun baking under the trees. They all looked in good nick, but still, I reckon it gets a whole lot colder here than they’re used to Down Under and I couldn’t quite see why they needed to be there, rather than out in the Aussie bush somewhere. I think we saw one on our last visit here too, a random lone albino wallaby in a paddock near a house. Is it a thing here? Don’t know. 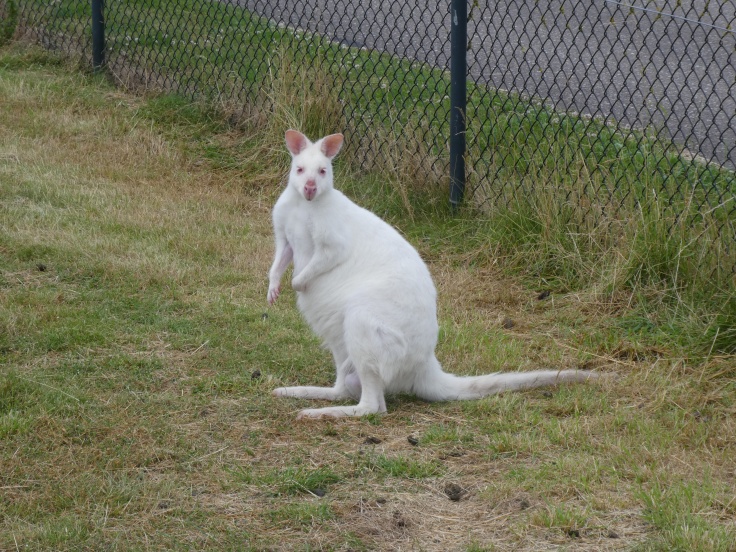 We rode into the lovely little town of Deventer, another one on our list that had been suggested we visit. We pedalled into the cobbled street and passed an old, covered shelter being used for bike parking, that dated from 1889.

“Remember that place,” said Steve as we rode past under a dark and threatening sky, “we might need to take shelter there soon.” No more than twenty metres further on, he added, “Like now!” as the rain started to come down. We did a quick about turn and raced back to the shelter of that roof and stood, waiting for it to pass. We waited…and waited…and waited. It wasn’t going anywhere. It wasn’t particularly heavy, it was just persistent. Steve unloaded his rack pack off the back of the bike, plonked it on the ground and then plonked himself on top of it. “Might as well have lunch,” he said, reaching for a bread roll as he positioned himself on his makeshift seat. So we waited some more and I got Nora ready for action again and then finally it eased to a drizzle and we pedalled out into the streets.

Another lovely little town! Deventer had a maze of narrow little cobbled alleys and laneways, wide pedestrian streets and squares, but those quirky little lanes here, there and everywhere, were absolutely delightful. 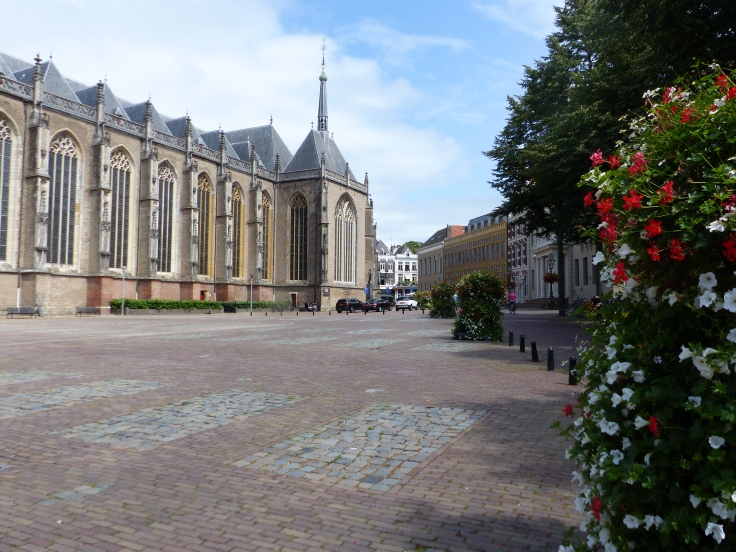 On our way out, I ducked into a supermarket for a couple of things and I stood at the checkout, ready to pay and ready to get my Dutch into action. The young man serving said something to me, which I didn’t understand and so I began my script. At least the word for “sorry” in Dutch is “sorry”, so I can always get the first word out no worries.

“Sorry…” I began, about to apologise for not speaking Dutch.

“No, I’m sorry for not speaking Dutch,” I said, “I was about to say ‘ik spreek geen Nederlands’ but it didn’t come out.”

“No, it’s my fault,”said that nice young fella, putting his hand on his chest,  “I’m sorry, I didn’t realise.”

“You don’t need to realise,” I assured him, “I’m sorry I’m not speaking Dutch!”

“We keep practising, but it’s just not rolling off the tongue yet,” I said.

“It’s a very weird language,” he said, still trying to reassure me, “with all that grammar, it’s very strange to learn.”

I thanked him and he smiled and gave a parting, “Have a very nice weekend.”

I returned to Steve, who was waiting with the bikes. “Seriously!,” I said, “can people get any nicer!” We just meet the most delightful people all the time!

Just as we were about to ride out of town…down came the rain again…heavy! People scurried in all directions seeking shelter, we scurried with them as fast as two people with heavy, cumbersome bikes can scurry and we stood under a tree, again waiting for the deluge to pass. Pass it eventually did, the sun came out again and off came the coats to enjoy the heat of the day. It was just one of those days where the weather was as indecisive as we can be and just didn’t know what it wanted to do!

To make our way out of Deventer and continue following our numbers, we needed to cross the river, so onto another ferry we went. We joined the other passengers and took the short choof across the water.

Then up the ramp we went on the other side. “Windmill!” I called to Steve again. There was another one! Right there, off to the side of the little ferry landing. Number three for the day!

Our onward ride continued to be lovely, with the scenery of the countryside, under trees and beside forest. Then, off to my left I actually saw a cluster of six wind turbines, the modern day windmills. They were the first of those we’d seen here and they were the only ones we saw today. No others around, just half a dozen there on their own. It added to the tally for the day though. 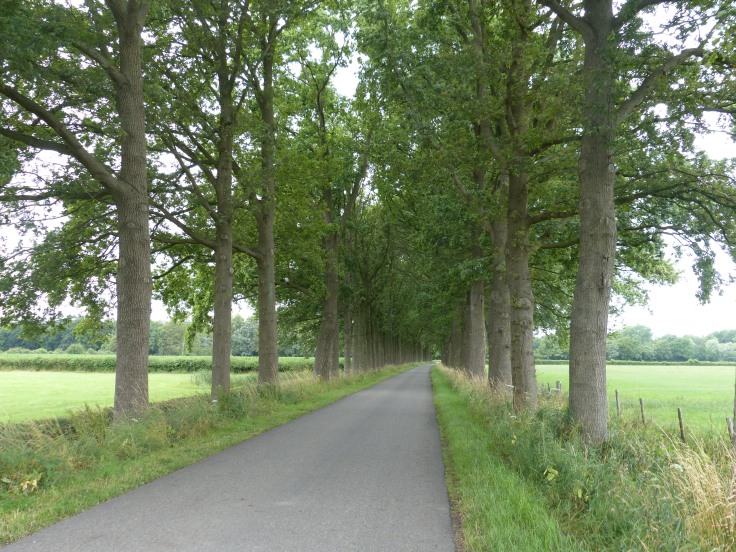 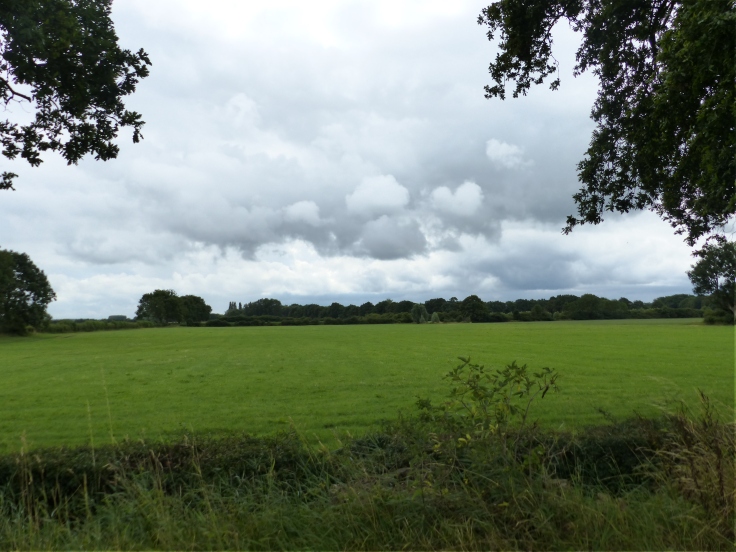 As we pedalled along a line of trees, we reached our pitstop. Despite there being some rain today, we decided to throw caution to the wind, adopt a sense of meteorological optimism and return to the Nylon Palace. The campsite is amongst trees and we have a quiet little pitch tucked into a hedge and we set ourselves up in our first Dutch camp, with a relaxing post-ride cuppa, before a quick ride up the road for supplies and the day was done. 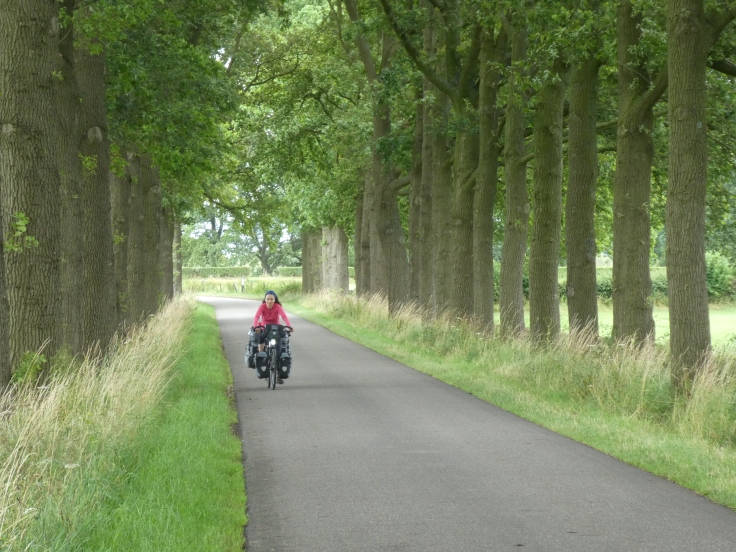 What a top day. What a fun ride. What a great place to be. Apart from a few appearances from the rain, we had a warm and fine day, the scenery was great, we came across more friendly people and we got to see not one, but three of those “story book” windmills that are so quintessentially Dutch, plus a few of the modern day ones too. Bonza!  We’ll continue to be on windmill watch tomorrow as we ride on and see if we can add to the tally. Now, if we could just see a little chap with his finger plugging up a dyke, the story would be complete!

Time in the saddle: 4 hours 31 minutes

3 thoughts on “Windmill, One O’clock!”