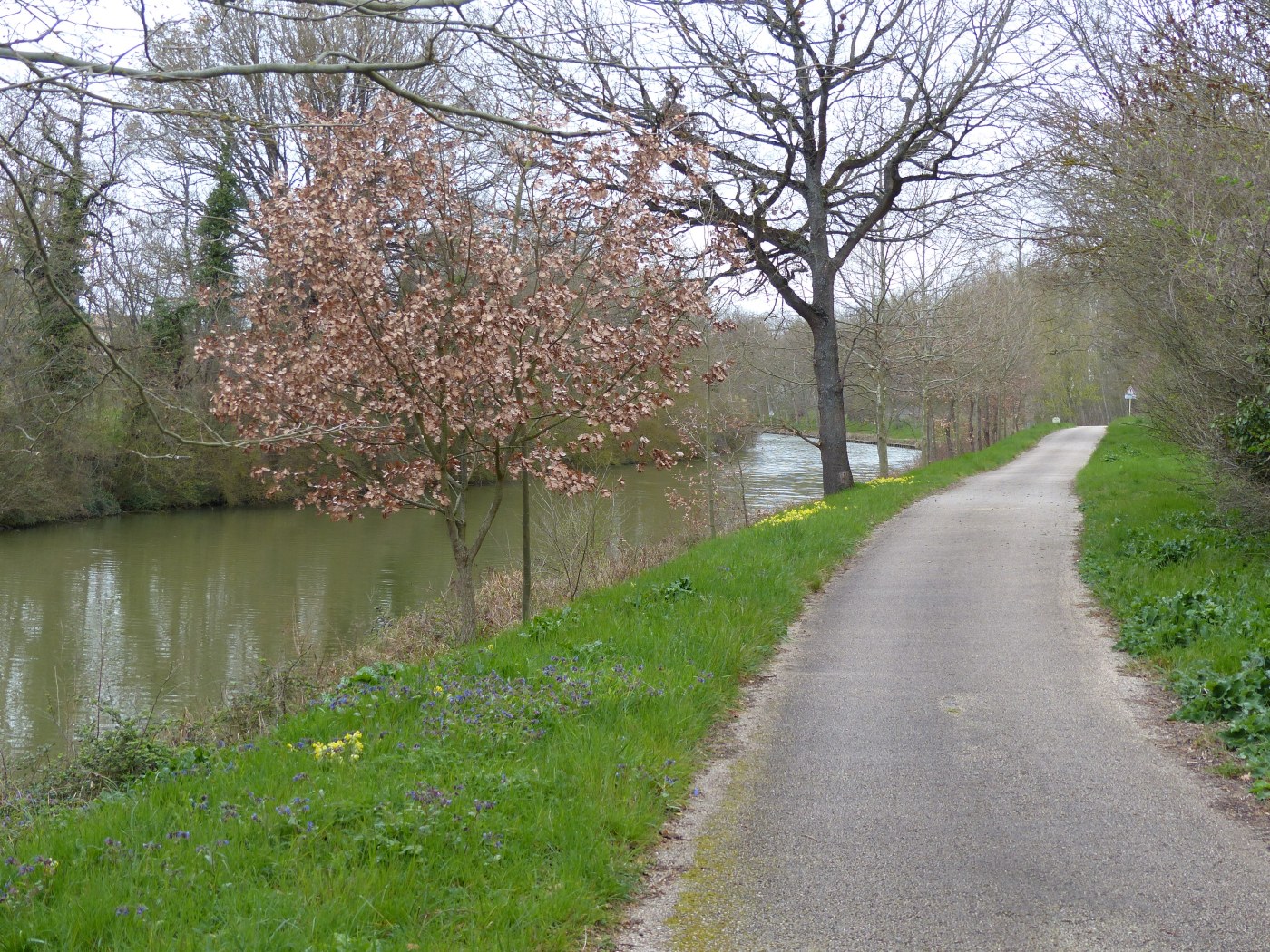 The day began grey and cold and drizzly after overnight rain. I added another layer in the hotel car park and we set off towards the cycle path beside the canal. Oh my…what a path! It was wide and sealed the whole way! No bumps, no holes, no tracks, just a wide, smooth concrete path to take us all the way to Toulouse. Bliss!

Being Saturday, there were cyclists everywhere and the occasional runner too and since it’s my usual practice at home to say Hello to everyone I pass, I was Bonjour-ing left, right and centre to every pair of feet or wheels that passed me in either direction. I couldn’t tell you the tally, but I’m sure I set a new record for the highest number of Bonjours per minute for a single non-French person.

Oh, and you’ll never guess! Y’know I mentioned in a previous post how the scenery and the canal reminded me of Wind in the Willows and the scene just needed Ratty or Mole to make it complete? Well…I saw Ratty! We were pedalling along and saw some ripples in the water and there he was, swimming along! Very special!

We stopped for a very quick elevenses because it was pretty cold and Steve added another layer and I added my puffer jacket and we pushed on, both complaining of freezing feet, but our spirits were undampened.  It was another day of fairly light winds, which was brilliant, so that accompanied by the nice path, made for a really nice ride. Some warmth and sunshine and it would have been completely perfect. Oh, we got a bit rained on too! 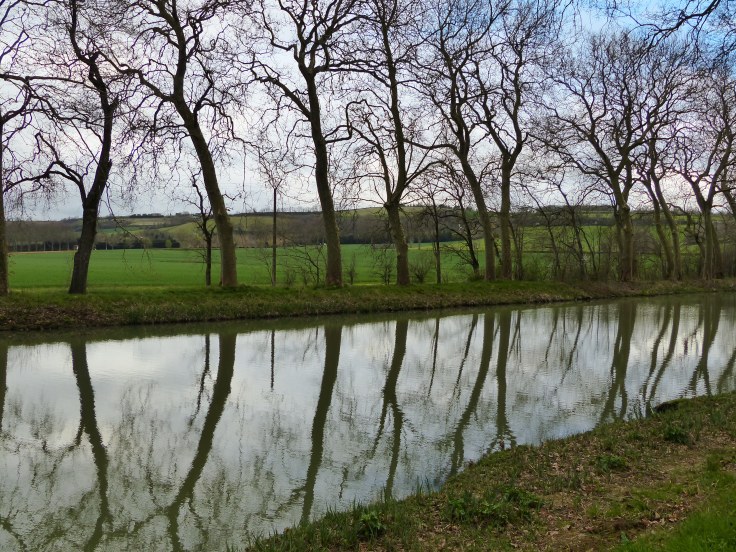 I saw something else that I thought was just excellent. I know I’ve mentioned how much I like seeing people with their baguettes, just walking along or sitting and tearing a baguette into pieces and snacking away. So the baguette is obviously a big thing. Well, check this out…a baguette vending machine! How great is that!

We continued our smooth and uneventful pedal towards Toulouse and I just love riding through the avenues of trees. It would be absolutely spectacular in autumn. As we were riding along, our odometer hit a little mathematical milestone…1234! We won’t see that again.

We arrived in the city of Toulouse and the bike path continued right through the city. As we were riding along, a fella rode beside me and spoke to me in French. I said, “Je ne parlez pas Francais,” and he said, “English?”

He asked me where I’d come from and where I was heading and then wished me a good journey.

A little further on we’d stopped at traffic lights and he pulled up beside me again.

“So you’re from Australia.”

“Oh, Tasmania,” he replied in a tone that was clear he’d heard about Tasmania, which always surprises me because I think we’re so small and tucked away that no one knows we’re there. Yesterday when we met Claude and Mette from Switzerland and told them we were from Australia, they were interested, but then when we said Tasmania, they grinned and Mette turned to her husband and said, “Tasmania!” So, I’d really like to know the impressions people have of Tassie for it to get that reaction, because I honestly just assume no one knows about us, but I’m obviously wrong and the people who we’ve mentioned Tassie to, respond with such excitement! Anyway, the French fella and I continued chatting at the pedestrian crossing and he asked me how we were staying here and I told him a tent, when the weather is OK and sometimes cabins and hostels. Then we said goodbye again and we pedalled off. See, all these nice friendly, chatty people we get to meet!

We checked into our hotel, warmed up in a hot shower, wandered off to get a final top-up of supplies before everything closes for the Easter weekend and then had a little rest in the room. We rode 50km today. It may not be of interest, but I thought I’d show you what I carry with me on a ride, to eat during the day, in case anyone’s wondering what the non-pastry eater carries. I try and carry things that are light and portable and relatively healthy. So this is pretty much my daily stand by collection that I carry with me: carrots, a red capsicum cut up into pieces, some nuts and sultanas, a roll or rice cakes with peanut butter and jam or they have a nice vegetable pate over here that I’ll spread on it sometimes. That’s it. For elevenses I’ll have some carrots and a few nuts, for lunch, the bag of capsicum and the roll and if I’m peckish during the ride, I’ll snack on the rest of the carrots and if I’m a bit hungry at the end of a ride I’ll have a couple of rice cakes. So there you have it, that’s my daily “pack-’n-go” menu on the bike!

We finished the day with a late one. We went out to Carnival, which was a huge street parade, like Mardi Gras, with floats and costumes and masks. We hired a bike from one of the city docking stations, rode it out to the parade, docked it again at a different station and joined the crowd lining the street and bridge. There was so much to see and it was a real celebration of different groups, cultures and nationalities too. There were floats with slogans, my favourite being “Je suis cheer up!” and floats celebrating different communities too, such as African drummers and dancers, Brazilian dancers, Chinese dragons, Bollywood dancers, belly dancers…the list goes on. It was a sea of colour and sound and sacks and sacks and sacks of confetti being thrown everywhere! When it was all over, we picked up a bike again and rode it back through the city streets, full now of people and night-life. I actually think that was my favourite part of the night! It was good fun riding through the streets, weaving around people, zipping across roads, riding under the street lights and flying along in the chill night air. Good fun! 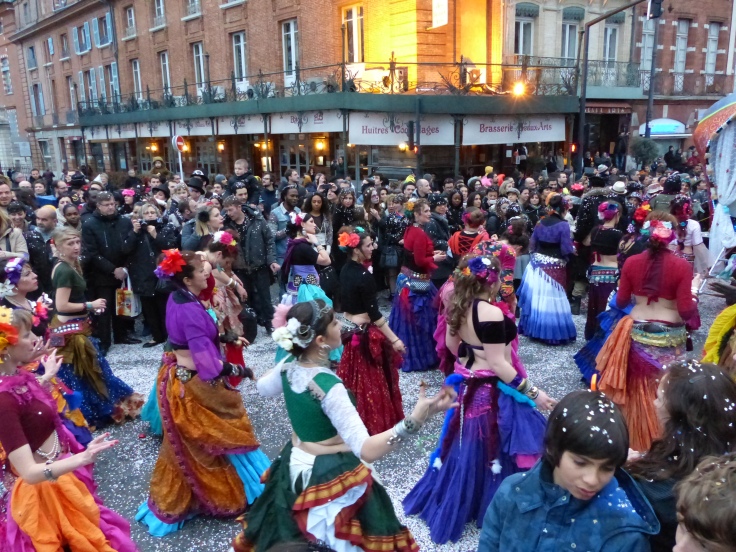 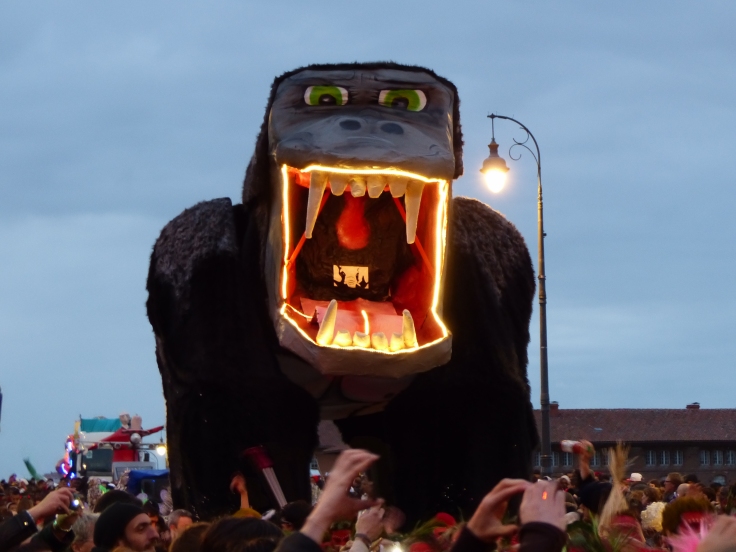 So today was an Easter Saturday with a nice ride, friendly people and a colourful street parade to round it out. Who’d have thought last Easter at this time, that we’d be spending this Easter in Toulouse in France! No chocolate eggs for us tomorrow, but instead we’ll have a day of roaming and exploring Toulouse and maybe zipping around on a bike again, just for the fun of it! We will have no plans, other than to blend in, discover, relax and have a bit of fun as Two Tasmanians Touring Toulouse! I wonder what we’ll find…?

4 thoughts on “The Perfect Path!”